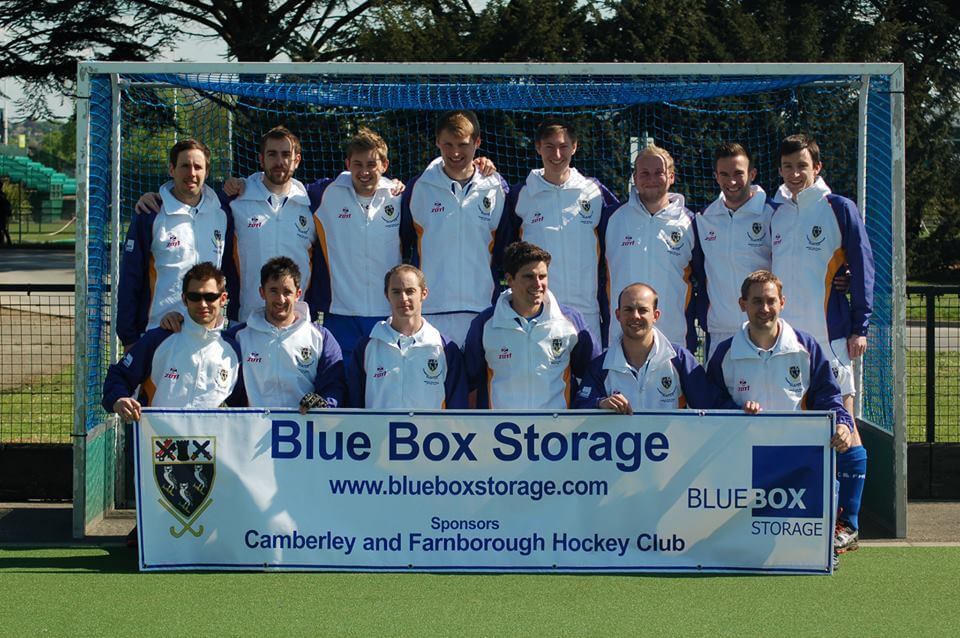 Blue Box Storage are proud to sponsor Camberley & Farnborough Hockey Club who made history by winning the National Vase competition for their first time in their history.

Smith saw his side rip up the league form book to beat Surrey 1 champions Basingstoke and lift the National Vase trophy for the first time in the club’s history at Beeston Hockey Club, Nottingham.

C&F twice powered into a lead but twice they were pegged back before man-of-the-match Todd Hutcheson coolly slotted home the winner nine minutes from time to spark wild celebrations.

“It was an absolutely memorable day,” said Smith, who was standing in for skipper Alex Wilson and will take over the armband next season.

“No-one could have possibly given it any more and for those final nine minutes in particular the players put their bodies on the line to keep that ball out.

“To be National Vase champions after the long, hard season we’ve had is a monumental achievement, especially to step up to the mark against a side who have beaten us twice in the league this season and finished up as champions.

“I know everyone at the club is incredibly happy and immensely proud, myself included.”

Generally speaking, the Watchetts Rec side were on the back foot for the opening 25 minutes but broke the deadlock against the run of play when Hutcheson and Smith combined to draw a fantastic save from Adam Smith before the latter slotted home the loose ball into an empty net.

Smith’s side had chances to double this lead in the first minute of the second half but were denied by the opposition keeper, and this proved vital at the start of the second half when Basingstoke went straight down the other end to equalise through Daniel Bowden, who lifted the ball over the advancing Tim Searle.

But just after Basingstoke failed to convert a penalty corner, C&F reclaimed the lead when Simon Needham struck an unstoppable shot from a short corner past the keeper.

Back came Basingstoke again and within minutes they were awarded a penalty stroke when a defending foot prevented the ball from going in and Ben Shaughnessy made no mistake.

Both defences stood firm, but just when it looked like extra time may be required, Camberley & Farnborough got the breakthrough.

A defensive error allowed the industrious Hutcheson to intercept a back line pass and run through on goal, slotting the ball past the advancing Smith.

Basingstoke rallied in a desperate bid for a late equaliser, but C&F kept out two penalty corners to hold on bravely and complete the most historic victory in the club’s history.